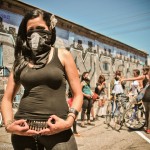 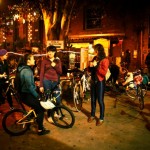 The Ovas at Olvera Street in protest. 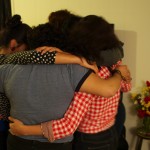 The Ovas end one of their bi-weekly meet

Two months ago, when 22-year-old Bree’Anna Guzman was murdered in Lincoln Heights, the all-women bike group Ovarian-Pscyos Bicycle Brigade scrapped their previously planned ride to ride instead through the neighborhood to protest the killing.

“Whose Streets,” one woman called out.

“Our Streets” the more than 30 women riding answered.

While many recent bike groups are either bicycling for recreation, bringing awareness to bicyclists on the road, or use the bicycle for social justice movement events, the Ovarian-Psycos Bicycle Brigade is a community inspired women’s movement that does all of the above and then some.

In Los Angeles, fewer than 1 in 5 people cycling were female, according to preliminary data from the Los Angeles County Bicycle Coalition’s most recent bicycle count. While this trend has been the constant in cities across the nation, the number of female bicycle groups in Los Angeles has grown from just a couple a few years ago, to at least four.

The currently all-Latina collective with roots from various parts of the Eastside pride themselves with their exclusivity to women, with sticker slogans like “Ovaries so big, we don’t need no fucking balls.” Their monthly all-women Luna Rides, which takes its name from the moons connection with a woman’s menstrual cycle, bring up to 30 women riders each ride. For their two-year anniversary in July, the Ovarian-Psycos are also planning the first female version of the monthly Critical Mass, which will be called Clitoral Mass.

For many of the women it’s their first time being involved in an all-female collective. The oldest members are 33 and the youngest is 20. Some are artists that ride bikes, and some are pure bicyclists. Yet the Ovarian-Psycos has become a type of sisterhood that, for many, they have never had before.

“Being around women, learning that we can interact in a way that was not hostile or competitive; it’s been a very new experience,” said Magally “Maga” Miranda.

Though the group has found stability recently, the group’s continued existence was never a sure bet. On the very first Luna Ride in July 2010, Xela, the de facto leader of the group at the time, hit a pothole on the road and fell face forward off her bike, hospitalizing her for two weeks.  Andrea Ramirez, or “La Blackbird,” recalls that many bike riders didn’t come back after the first ride because they were scared.

Though one half left, and another came back for the second Luna Ride, Xela said, the group stagnated for the first year, never topping more than 20 riders.

“I was worried always that it’s going to die someday,” Xela said.

Yet, right before the Ovarians one-year anniversary, Xela started to recruit core members to better organize the group.  After the one-year anniversary at Solidarty ink, and with a fairly consistent 12 core members, the group finally started to take off. Like before, each ride had a theme. Specific workshops involved speakers, and teachers on a range of social issues, and bicycle issues. Some workshops talked about women’s health, while other covered self-defense. Yet, the groups were getting bigger, and the core members were helping spread the word.

Many of the women say they feel they are not taken seriously in the biking community because their rides aren’t as long as traditional rides, there are usually many first-time riders, and the ride will stop and wait for one person. But, these limitations, Ova member Natalie Fraire said, can be a positive.

“We are encouraging a lot more riders and that’s more important,” said Fraire.

Riding as a women group has also made the riders more aware of the difficulties of riding in the city as a woman. Individually, or in small groups, Ova Elvira “Ashes” Arvizo has been catcalled by men on the street, and during one Luna Ride, the group noticed a male motorist was trailing the group. The women stopped and started to yell at the motorist, which caused him to flee.

As the group has grown, the women have needed to get closer. Many of their biweekly meetings resemble the chaos of a family dinner. At a recent meeting, Maryann “La Fingers” Aguirre would belch across the room, giving many of the girls a laugh, and Fraire ran to the oven to find she burned the artichoke dish brought. If the meeting ever got out of order, a clit checker (meeting organizer) would bellow out a warning to get the meeting back on track.

Each Ova have brought various skills in community organizing, photography, graphic design and bike mechanics which they also share with the rest of the group. Gloria “GLoTography” Vasquez takes most of the photos that are on the groups websites, but she has also taken the time to teach Ovas like Fraire how to use a camera. The group has also helped Vasquez to break her shyness and talk more with women on rides.

“Now run into women across streets and able to converse with them than just pass them by,” said Vasquez.

Each season there are rotating leaders of the group called a left and right ovary, and many of the women are expected to step up to take care of a portion of their work.

Andrea “La Blackbird” Ramirez said she could never get comfortable riding with the Midnight Ridazz because men always outnumbered women. Aside from men outnumbering women during Critical Mass, Arvizo said will leave riders behind, and that can deter a young woman-rider to join a ride.

The Ovas offer a space for women, Xela said. And the rides though recreational, can become extremely personal, with some events bringing women to tears. During a stop on their ride that was themed on domestic violence, many women came forward about their experiences.

The personal nature of the rides, and the already numerous LA bike rides is the reason Xela said, why it’s exclusive to women.

“It’s just a time for women. If they are trying to open up, won’t be comfortable opening up if there are men around,” said Aguirre.

Xela, whose been a part of women collectives that have never lasted, said she knew the Ovarian-Pscyos was a different type of all woman collective at the one-year anniversary. Jocelyn “Joss the boss” Hernandez brought a cake she made and designed to the group at the end of an interview at the Boyle Heights online radio station Centro de Comunicación Comunitaria. The cake had a symbol of a car with a slash over it.

“You do that for your sister, your best friend, and she did this for the Ovas. “That’s nice”

For more information on the Ovarians, send an email to [email protected] or go to their website at ovarianpsycos.com.

Thought a lot of you would enjoy this article.

Marriage
2012 May 25
A Brighter World
2012 March 12
This entry was posted in Opinion and tagged bicycles, politics, protest, reblogged.