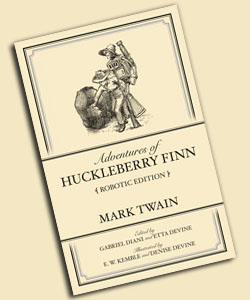 I’ve only gotten through the first couple of chapters and I almost missed the first instance where the word robots was used because it was so perfect.

Ms. Watson she kept picking at me and it got tiresome and lonesome. By and by they fetched the robots in and had prayers, and then everybody was off to bed.

Around the same time I heard about the Kickstarter, I read an article about a publisher who planned simply to replace the N-word with the word “slave.” To me, that evades the issue of “the word”. The word slave doesn’t evoke the same hate or prejudice that the N-word really evokes. In the preface to the robotic edition, Diani and Devine use R2-D2 and C-3PO as examples of robots who are, in essence, slaves. They call Luke “Master” and they are purchased by his uncle.

I don’t know that this more than replacing the N-word with slave, but it certainly seems more current, while adding a certain tongue-in-cheek political commentary.

Postscript: It’s a little funny that the Brewster Rockit cartoon for this morning is very apropos.

This entry was posted in Opinion and tagged Huckleberry Finn, Mark Twain, robots.