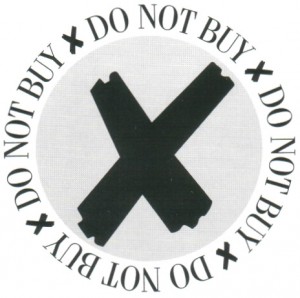 Some of you may remember that I’m still boycotting McDonald’s, although my boycott is now limited to breakfasts. Well, I may now be boycotting evenings at the Yard and Flagon. A recent Friday night was a less than ideal evening and has left me in a bit of a sour state.

The seating paradigm at the Yard is very much first come, first served, and yet on the night in question that paradigm had apparently changed. On a Friday afternoon, I have often met a group of acquaintances who are very much regulars of the Yard. These are a small group who are there often, often weekday afternoons, often at the same table, and who know and are known by all the servers and bartenders.

Such a relationship and familiarity would usually prompt some preferential treatment, especially with festival seating. But not this particular Friday, ladies and gentlemen, no, it was not to be. After standing around the corner of the bar for close to an hour, the group getting larger all the time, and a number of other people having come in and left for a lack of seating, an ideal table finally opened up. As I moved to claim it, I was rebuffed by the server, “Sorry, these people are moving to this table,” indicating a group of four at a smaller table.

So I returned to my ever-larger group at the corner of the bar. “Uhh, what’s happening?” “Apparently, another group has reserved the table.” “Uhh, that’s a thing?” “And I get their table,” pipes up some random dude. The discussion went on for several minutes about how that’s not a thing.

Maybe I’m being petty, maybe I should just let it go. But the customer service experience in me tells me that this is not how you treat regular customers. I learned that somewhere between 80 and 90% of advertising dollars go to getting new customers and the rest goes to keeping existing customers. Obviously, it doesn’t take much to keep people coming back, so just do it, and keep them coming back. And if your policies or procedures change in terms of how people can expect to be treated, maybe let them know. If a large group is standing around in a restaurant, they’re probably waiting for a table, so maybe check and make sure they’ve been given the right priority.

This entry was posted in Opinion and tagged boycott, customer service, Yard and Flagon.