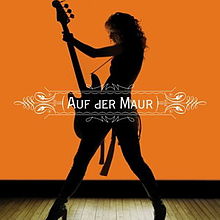 I’m sure I’ve been tiring you with all the Blue Rodeo; I know poor Ben doesn’t even like the group, or maybe just their music. I have at least one more before I finish with them, but here’s another artist that has gotten me through a difficult time: Melissa Auf der Maur‘s Followed the Waves, the first single from her 2004 debut solo album, Auf der Maur.

Auf der Maur came out early in 2004 and it took me awhile to track it down, so it was probably summer by the time I picked it up for myself. My Nana (my Dad’s mom) died in September 2004 and I spent a week in London (Ontario) helping to sort out her house. I had a rental car and had brought a handful of compact discs with me to listen to—random local radio stations weren’t going to cut it. I found myself just letting the album shuffle and repeat for four or five days while I drove around in that car. I don’t know if it made me feel better or just gave me something else to focus on, but listening to it always brings back memories.

Sweet Dreams (Are Made of This)
2021 January 4
MMMBop
2020 September 28
Blinding Lights
2020 September 21
This entry was posted in People and tagged Melissa Auf der Maur, music, video.