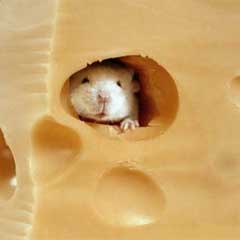 I have mice living in my house. Gross, I know, but  a fact of life and a problem I’m trying to solve. I have a dog in the house, so my efforts include some safety precautions. No poisons, and no traps out during the day for puppy to get into. I’m not interested in live traps—sorry, folks—I’m interested in killing the mice dead; no more mice to get into my house.

A couple of weeks ago, early in the morning, I heard some kind of weird clickety-clackety noise in my living room, and I got up to investigate. A poor little mouse had managed to get just his foot caught in the trap and was not squashed dead, as I had hoped and intended. My solution? I took him outside and smashed his head with a hammer. Did I feel good about it? Hell no. Was I hoping that it was the one and only time I would ever to do that in my entire life? Shit yeah.

And yet this morning, after another round of trapping, I was successful in trapping mice, and unsuccessful at the same time. One mouse was caught and squashed dead in a trap. The other mouse? Each back foot was caught in a separate trap. It looks like he came out from under the stove, or was on his way under the stove, and got caught, then stumbled across another trap that was sprung but caught under the stove and failed to close, and finally hit a third trap that nailed his other leg. My solution? I took him outside and smashed his head with a hammer. Not my best day.

But then on the way back from our coffee run, one of the guys at work started to sing both the Backin’ Up and Bed Intruder songs, and I laughed my ass off. I couldn’t believe that someone, and definitely this guy, had seen the videos and heard the songs enough times to remember, let alone sing, them! Thanks, man, that made my day a lot better.

This entry was posted in Funny, People and tagged mice.