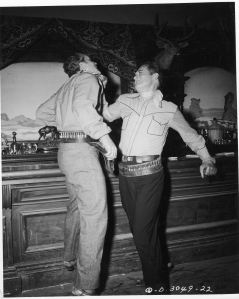 Clive went downstairs into the restaurant for dinner. The restaurant was attached to the hotel, but he had to leave the hotel and enter from the boardwalk. The chalkboard outside offered a daily special of meatloaf, mashed potatoes with gravy, and boiled carrots, with apple cobbler as the dessert. Clive was not really fond of meatloaf, but as tired as he was, he was willing to eat just about anything at all.

The first thing Clive noticed when he walked in was the waitress. For a moment, it was like she was surrounded by a shimmering halo of light. She was by far the most beautiful woman he’d ever seen. Of course, he’d known popular doves like Missy Perdue and Cherry Blossom, but this girl had them all beat. She was maybe a few years younger than Clive, and he couldn’t take his eyes off of her.

After what seemed like forever, he realized that she had asked him a question. “I’m sorry. I beg your pardon?”

“I told you to sit wherever you like, and asked if you wanted to see a menu? Most people just get the special posted outside.” Her voice was light and airy, exactly as Clive had imagined it.

“Uhh, yeah, just the special, thanks. I guess I’ll sit over here,” he answered as he moved to a small table by the window.

“Alright, I’ll let the cook know,” the angel told him.

Some dirty, young kid yelled over, “Hey, girlie, some more coffee over here?”

“Oh, sure, sorry about that,” the waitress said, “I’ll be right there.”

The girl disappeared into the kitchen and came out few moments later with a pot of coffee. “Your food’ll be up in a minute or two, mister,” she told Clive.

“Would you hurry it up?” the other man shouted.

“Oh, sorry, I’m coming. Sorry ‘bout that.” She poured the coffee into the mug that was sitting on the man’s table. She was obviously flustered and didn’t notice when she overfilled the mug and the coffee spilled on the table.

“Watch it there, dummy! There’s coffee on my pants! You nearly scalded me!”

“What are you, stupid? Are ya simple? That why they got you workin’ here? Too dumb to do anythin’ else?”

After she made a mash on him, Clive wasn’t about to let this punk insult the girl. “Look, mister, you watch yerself with the lady.”