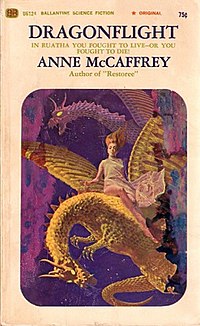 I just finished reading the first part of Dragonriders of Pern, Dragonflight. I’d forgotten what I had purchased from Amazon for my Kindle was in fact all of the first trilogy of the books, so I was actually a little surprised that I came to a significant section ending. The Dragonriders of Pern is a trilogy and Dragonflight is the first book. There may be some spoilers in this post, I’ll warn you now.

The original settlers of Pern are Earth people who arrive by spaceship. They use up all of the resources of the ships to build their settlements and so they don’t have technology. They start from scratch and we’re introduced to what seems to be somewhat medieval sort of civilization. In fact, over the course of a few thousand years, the civilization has lost the ability to do a large number of things because the knowledge wasn’t needed or the tools weren’t available and so the knowledge disappeared.

Pern is threatened by the Red Star, an oddly-orbiting planet that somehow moves close to and then far from Pern. When it is close, it releases Thread; the threads burrow into the ground and kill all the vegetation. The people of Pern have trained dragons to fly out and burn the threads in the sky before they can reach the ground.

There are some interesting lessons about oral history and the risks of forgetting the lessons of the past. As well, as the risks of information silos, and having only a few specialists who know the secrets.

This entry was posted in People and tagged Anne McCaffrey, books, Kindle, review.