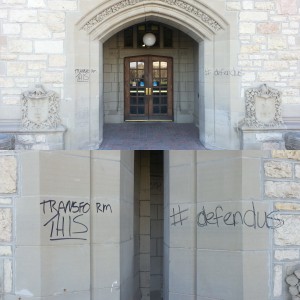 To begin, I had this post written and ready to publish yesterday, but as I was getting ready for bed, I found the landscape had changed. The university where I work has been in the press lately and a lot of people are asking for my opinion. I generally just answer, “No comment,” but all too often that leads me into at least a brief discussion. Here’s what I think, I’m only going to say this once.

The university is facing a potential budget deficit. Whether this is a foregone conclusion or just a worst case scenario is not really up for discussion. The reality is that the university needs (or at least wants) to achieve a reasonable degree of financial stability. This is a good idea.

And over the last year, the university has been engaged in a process known as TransformUS. The intent of this process is to evaluate the programs and services of the university and make them more efficient and cost-effective. The process fits an idea that is often in my mind: “Decide what’s important and do that.” This is a good idea.

That’s not to say that the process is not without flaws. It’s been expensive, time-consuming, labour-intensive, and viewed with hostility, contempt and derision on multiple levels. But throughout the process stakeholders have been involved. Students complain they weren’t consulted, but there were student representatives involved, as was the students’ union. Faculty seem to think there was some preconceived notion that academics, and the humanities in particular, were unfairly targeted as unimportant. This cannot be true, there were significantly fewer recommendations to cut academic programs than administrative services.

Which brings us to the last week’s debacle of firing the executive director of the school of public health. A situation created by narrow-minded, short-sighted, selfish people who can’t see the forest for the trees. Who can’t see the university beyond their own tiny scope. And while they agree that change and budget adjustments are required, can’t fathom that it might have to happen to them. A recent incoherent rally about the process, academic freedom, free speech, student involvement, students as a commodity, Aboriginal education policies, corporate involvement in higher education, diversity, potholes and summer construction resulted in the vandalism of a heritage building on campus.

Cries of “academic freedom” and “muzzling free speech” were thrown about. Bullshit. The executive director was a part of the discussions affecting his school and had ample opportunity to make his case. The decision was made to pursue integrating his school with the college of medicine. As a senior leader in the university, he was asked to support the decision publicly. He chose to voice his dissent to the media and was fired. That’s what would happen in any other organization anywhere.

You believe you are special, that somehow the rules do not apply to you. Obviously, you are mistaken.

If a vice-president in a bank disagreed publicly with the CEO or a government minister disagreed publicly with the premier or prime minister, that VP or minister would be asked to resign. But, no, somehow the university is special, the world doesn’t work the same way at the university. Again, bullshit. To make the case even simpler, he was asked to do his job or leave. If a barista was asked to pour the coffee in a particular way and chose not to, she would also be asked to leave. You don’t want to do your job the way you’re asked to do it? Find a new one.

Unfortunately, the university administration chose partially to back down from its decision, resulting in the resignation of the provost over the “blunder”, and since I began writing this post, the termination of the president. An unnecessary shame. If an error was made, let the executive director of the school of public health take it to court and get a settlement, if necessary. Our president and our provost worked hard to bring about the kinds of changes the university needs without compromising academic integrity. Regardless of the commentary on the situation and the budget-cutting process, there was nothing being lost academically.

There seems to be some idea that money shouldn’t matter at the university, that somehow we should be able to provide any kind of post-secondary education to anyone regardless of the cost. Bullshit. There is not one instructor or administrator on campus who would work for free. So we charge students tuition and we ask the taxpayers of the province for enough money to continue operating. Students never want to pay higher tuition, but complain when their lab and classroom technology isn’t state-of-the-art. Instructors and administrators want regular pay increases and proper facilities in which to work. These things cost money. And more every year. And taxpayers want to pay less tax.

So we’re forced to find ways to save money. We amalgamate units that provide similar services, and then require fewer people. We reorganize departments so they require fewer administrative resources. And we ask instructors to teach larger classes and discontinue programs with low enrolment. Or we start to work for free. It’s time to choose.

I don’t know anymore if the university is the right place for me any longer. I posted before some questions I have for myself and my future and those are top of mind again. The university is supposed to be a place where we can test some innovate ideas, take some risks, and learn, learn, learn. And I don’t see it anymore. Even people within my area who should know better are suggesting ridiculous options simply to avoid change or new work. We’re all professional, educated adults. Let’s start acting that way.

Naïve and Gullible
2014 May 30
This entry was posted in Opinion and tagged budget, higher education, money, post-secondary, taxes, university.