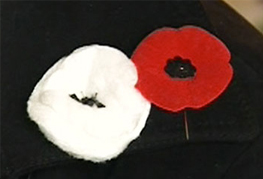 I had a different post scheduled for today, but I’ve postponed it to tomorrow to write a commentary on red versus white poppies for Remembrance Day. Yes, Remembrance Day was yesterday, and my brief post with the photo of the National War Memorial I took in 2005 and the stanza from Laurence Binyon’s poem was my short, solemn contribution.

Today is going to be more of a political rant, and aptly this blog is for “Things I think about or just find and want to share.” I had a short, inconclusive exchange on Facebook with a friend in Montréal who chose to wear a white poppy as “a remembrance of everyone who has been affected by past wars (all sides involved, civilians, women, etc)”, which she believes is not the case for the red poppy, “indicative of the glorification of war”.

I certainly don’t believe that the red poppy glorifies war nor does it discount civilian casualties. And I don’t believe that anyone wearing a red poppy does so in support of war. The act of remembrance signified by the red poppy implicitly remembers everyone affected by past wars; certainly more so Canadians, in Canada. Explicitly, as seen on war memorials, are remembered soldiers who died, but that doesn’t neglect soldiers and civilians whose lives were irreparably altered by their experiences.

The white poppy, apparently, is a remembrance of everyone, all sides involved, including civilians, who has been affected by past wars and is also a bid for peace. I don’t see any new meaning there. I see a diluted message and confusion. With one symbol of remembrance everyone can believe what they want and be supported by everyone else. With two, there is now the idea that one is right and one is wrong. With both seemingly arguing the same point.