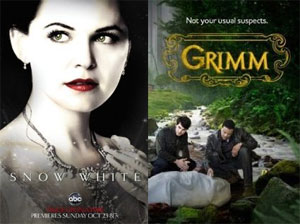 Once Upon a Time and Grimm are both new television shows that I quite enjoy, but for which I only see limited success, unfortunately. Both are modern retellings (is that a word?) of fairy tales, or rather stories that bring fairy tales into the modern day.

In Once Upon a Time, the land of [Disney] fairy tales has succumbed to a curse put on it by Snow White’s wicked stepmother, the Queen. All of the characters have been transported (?) to the “real world” town of Storybrooke, Maine, where they are oblivious to their past. The only person who knows what’s really happening (apparently) is the transported Queen’s adopted son, Henry Mills, who is the son of the daughter of Snow White and Prince Charming, Emma Swan. The prophecy around the curse is that Emma will return after 28 years to break the curse.

Given the story line presented in the very first episode, the story has to end, which I can’t really see the show going much more than one season. Beyond that, I think the story will simply drag on, and become nothing more than a soap opera, or become like Lost, a meandering, confusing story with a wholly unsatisfying conclusion. I certainly endorse it for now, it’s fun and interesting and mildly compelling, but once the curse is lifted, and especially if it isn’t, it may lose its charm.

For me, Grimm also has a limited lifespan. The protagonist is a Seattle-area police detective with ties to the Grimm family who were not only storytellers, but monster-hunters, too. The detective investigates murders and missing persons cases that inevitably tie to fairy tale monsters, like the Big, Bad Wolf (blutbad), or the Three Bears (jagerbar).

I’m sure there are a large number of Grimm fairy tales whose monsters and villains can be adapted to fit within the show. But I can see the writers and producers stretching pretty far fairly soon to include some of the monsters and villains, and reaching into some pretty obscure tales, as well. I think it’ll be fun for a while, but will drag on after too long.

This entry was posted in People and tagged fairy tales, Grimm, Once upon a Time, television.