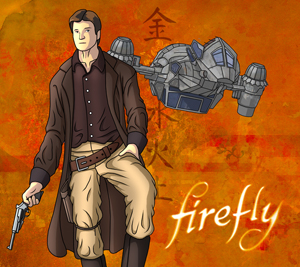 Alright, so the story of poor Carter McGill, betrayed and framed by his brother, forced to go on the run to save himself, is going nowhere. So I’ve started something new. I’m counting all the original words, but telling a whole new story.

I’ve moved into science fiction, with a slight Western feel. Yes, like Firefly. Who doesn’t love cowboys in space?

So here’s an excerpt from the story, called The Minus Men:

Mac hated being called captain. Sure, it was his ship, but he had won it at the faro tables in Marathon. It was not exactly customary to bet spaceships, but Marathon was not exactly the kind of place that bothered to enforce the rules. Even the android dealers and pit bosses were programmed to overlook certain behaviours. But count cards at the blackjack tables and you would be out on your ass just as if you were on New Vegas.

Now there was a planet. The whole place was just casinos, hotels, and showgirls. It was just a little too full of Confederation patrols. No, Mac preferred it out here on the frontier.

Out here is where Mac could ply his trade most efficiently. His trade? Oh. Well, I guess I can tell you. Mac was a smuggler. What did you expect? He was certainly no travelling doctor. Although, he could often supply a cure for what was ailing you.

It was just that kind of activity that had Mac spending a lot of extra time out here lately. For some reason, he had at least two Minussers hunting for him. If there were two that he was aware of, there were probably more, but he wasn’t really interested in finding out how many more.

The two he’d run into were on Athena. They’d looked like exactly what they were: two men intent on subtracting Mac from existence. To them he was just another name to erase from their list.