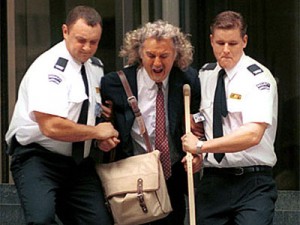 I was out to Hudson’s Taphouse this weekend, as I frequently am, and saw an example of customer service that was less than admirable. I don’t know the details, nor did I ask, but some people were asked to leave and they were not impressed.

If, indeed, the manager told her to ask the group to leave, I don’t understand why the manager didn’t do it him- or herself. That seems somewhat cowardly. If the manager had delegated the task to the assistant manager, I don’t know why she didn’t have all the information. And if she knew exactly why she was asking people to leave, why she didn’t just explain it to them.

When I was a manager and in a position to ask people to leave, I did. And I hate confrontation. I didn’t delegate to anyone, nor did I weasel around the issue. If a bartender asked me to enforce last call or help remove someone from the bar, I did. If I was asked by the guest to bend the rules, I explained that I trusted the bartender’s judgement, because that was his job. When some people were evicted for smoking pot in their room, I explained that it was illegal and not tolerated in the hotel.

My advice to the staff member in the bar is to take some responsibility and to do her job with authority.