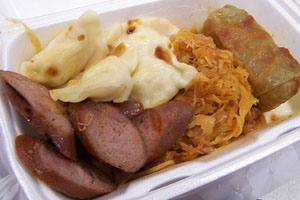 Not to mock Saskatchewan, nor its purveyors of fine food, but A Taste of Saskatchewan is kind of stupid.

With 31 booths and 94 menu items, you’d think it would be a great idea and an excellent experience. But you’d be wrong. Admittedly, I didn’t actually partake, but I feel comfortable and justified in my decision.

It was suggested, in my office, that we head down for lunch Friday. Not having seen any information about it, I popped onto the website to see what was up. That’s when I decided not to go.

Almost a third of the booths were for restaurants I can find in pretty much any mall food court. And the price was exorbitant, especially for food court fare. For the most part, each plate offered by each booth was two tokens. There were fully 9 items (less than 10%) that were one token. Reasonable? Not really, each token was $2.50, and one of the one-token items was a cup of coffee. That had better be one hell of a cup of coffee!

For $5, I would hope for a fair-sized plate of food. But at that price I may have had one or two plates and a smaller dessert, so $12.50. But, again, there were 94 items from 31 restaurants; my three items would not have been any kind of representative sample.

My suggestion for the future is $1 tokens and proportionally smaller plates, with perhaps even more items to mix and match.

If you disagree with me, I’m definitely interested to hear your opinion.

Feelings
2020 January 2
I think people don’t like coffee
2019 May 9
I don’t need to engage with you
2012 October 17
This entry was posted in Opinion, People and tagged complaints, food.