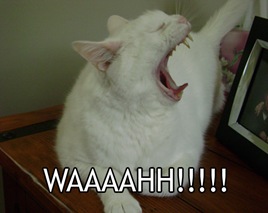 Yes, seriously. I’ve decided that I don’t understand people, and I’m not qualified to engage in debates on topics that relate to how people feel and act.

The other night, at family dinner, I was discussing how I don’t bother saving for things that I want. If I want to do or buy something and know that I can afford it (immediately or over time, using credit), I’ll do or buy it. Why not? To which I was told that some people (in fact, a lot of people) have already used their maximum credit.

But it also revealed to me that what makes sense to me doesn’t always make sense to others, or that it’s not the default for others. I admit that sometimes I don’t think all the way through my thought or opinion before I voice it, leaving open to debate from people who perhaps have thought over it longer.

In any case, I will try to vent more of my complaints here, allowing for feedback from my audience, which should give me some opportunity to think further about my thought or opinion.

Waiting for the Bus
2016 July 28
A Little Bit of Housekeeping
2012 February 9
Yoo hoo, here I am!
2005 December 12
This entry was posted in People and tagged blogging, complaints.