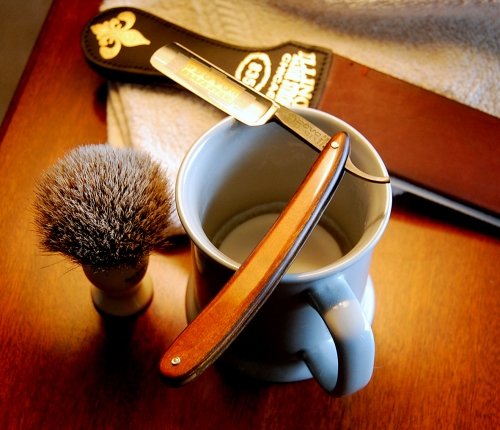 I mentioned before about the writing workshop I attended. Here’s another assignment we had, writing about a thing. In my case, I chose to write about a ritual. Again, this is related to the untitled Western I’m contemplating for NaNoWriMo.

It was something he couldn’t remember ever letting someone do for him. He vaguely remembered his pa showing him once or twice, but now it just felt like he’d always known. Always known the delicate motion of running the razor over the old leather strop, always known about soaking a clean towel in the just-boiled water, about warming his face and skin with the hot towel to soften the skin and hair. And always known just the perfect angle to hold the old, pearl-handled razor to cleanly shave his beard. With the grain and then against the grain, some folks liked to go once across the grain, but that was too much.

He hated shaving, but he hated the beard more. And if he was going to shave, he was going to do it right. He would let the beard grow a while, and he’d always have some cutting to do with scissors to get the beard to a length he could shave. He liked the sidewhiskers well enough, and his big, bushy horseshoe moustache, so there was some art to his actions.

I’m not quite sure where this goes, but it was an interesting exercise. I may try a couple more exercises like these two, just take time to describe a person, or a place, or a thing.